In the lead up to beginning my research, I must admit that leadership was not on my mind. I anticipated being challenged in terms of self-leadership, but I wasn’t thinking about the ways in which my research might help me to lead others. Yet as I enter the fifth week of my project, the latter has become more apparent than I initially expected.

Indeed, in the past few weeks I have been challenged – particularly in the way of being pushed outside of my comfort zone. A lot of my research is being carried out through fieldwork in the form of site visits and interviews and so I’ve engaged with people in a lot of unfamiliar situations. I’ve also had the opportunity to attend some public events, such as panel discussions and symposia, where I’ve been able to try my hand at networking. This engagement with the ‘real world’ has been really useful for my research. By talking to people I’ve been exposed, in particular, to the practicalities involved in my field, as well as to hear a range of different perspectives. I’ve been grateful to have the opportunity to be able to learn from other people’s experiences and humbled by everyone’s willingness to help me out. I’ve also been hugely inspired by examples of leadership that I can personally relate to.

On Thursday I presented my research as a part of a Tate discussion group, where people from various fields came together to discuss their research into some aspect of contemporary art in Scotland. Amongst the conversation, one issue that was addressed was the need for cultural leadership. In an economic and political climate where the arts are continuously being undermined, those who are able to effectively demonstrate the possibility of alternative models of growth, as well as to lead and support others to enact processes of creative development is incredibly important. In addition to this, another issue that was raised was the importance of research into untold narratives. This idea is particularly important in terms of breaking with the traditional canonical history of art – but I feel it is also relevant in terms of my own research interests.

My research is based on a phenomenon that is typically considered a negative thing – gentrification. Gentrification is not often openly discussed in terms of the impact art has in exaggerating these processes, and my research proposal developed from initial skepticism of the role of art and the ‘creative class’ within the working-class or post-industrial urban environment. Despite art’s acknowledged relation to the processes of gentrification, the consideration of issues of exclusion and displacement caused by gentrification are often neglected in discussions of both art and gentrification.

It is important that people are more aware of the social impact of artistic practices. Although it is almost never an artist’s ambition to contribute to these negative social effects of gentrification, understanding the process of ‘creative colonisation,’ as well as understanding the needs of those who inhabit the local area is crucial. It is following from this awareness that the development of more positive, conscientious artistic practices can take place, where understanding the relation between art and the urban environment may allow practitioners to anticipate the inherent problems of their practice. For many artistic practitioners, understanding their involvement in these processes has brought about self-reflexivity in the use of strategies of integration and engagement. In this way, creative organisations may coexist within existing neighbourhoods and art itself may begin to be reconceived as inclusive rather than exclusionary.

Furthermore, my experiences so far have demonstrated that some of the most useful alternative models of urban regeneration are being conceptualized through the arts. These processes can only be successful if the existence of those already inhabiting these spaces is acknowledged, and that the impact and sustainability of these processes is considered before intervention takes place. Over the past week I’ve attended a symposium in Glasgow where we’ve been exploring the possibilities of grass-roots urban regeneration, and ways to occupy the post-industrial city in a sustainable manner. The discussions have been lead by practitioners who are working to build and develop creative forms of spatial occupation and development, as well as to challenge pre-existing institutional structures. These discussions got me thinking about the practical application of my research, and how leadership skills will be particularly useful in the translation of these ideas into action.

In thinking about leadership, I’ve also realised that in many ways this research has provided an unexpected opportunity to explore some issues that are quite close to home for me. I’m from Christchurch, in New Zealand, where in 2011 an earthquake tragically destroyed our city. While being in Scotland I’ve always wanted to contribute to the rebuild – but I haven’t really found a useful way to reconcile my studies of art history with urban planning. In the last week in particular I’ve become more aware of how relevant this research is to this task – perhaps not in thinking about gentrification but in thinking critically about the role of culture in terms of regeneration and sustainable development.

Despite the fact that at times all the excitement and information has been overwhelming, I’m looking forward to processing some of this information over the coming weeks. Being aware of the authority this research may have, and with coming to terms with the responsibility of cultural leadership, I’ll also be beginning to look more into the ways this research can further become a useful contribution to the continuing discussion of contemporary artistic practices in Scotland. 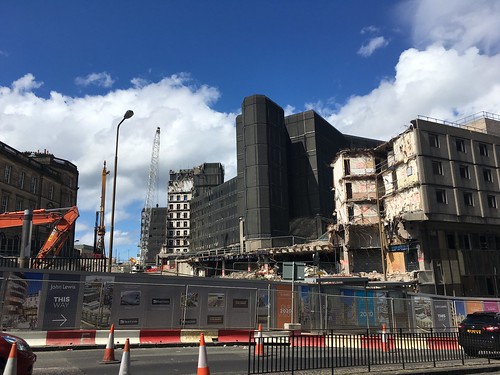